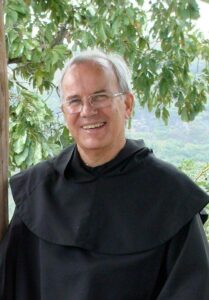 How will I know if God is calling me to Religious Life and especially to the Discalced Carmelites by Fr. John McGowan OCD

This is a good question and one that some people ask themselves. Though, I suspect, it doesn’t begin like that. It can begin with a feeling; always trust your feelings. That feeling can be nagging at you for some time, even years. It can begin with a feeling of dissatisfaction with what you are doing. At least that is the way it was for me. I left school and began working in a shipping and forwarding office in London. For a while I loved the job. The novelty, the introduction into an adult world, where I got paid and called adults by their first names. It was a great place for making friends and for having fun. However, after a while I wanted more. At that stage I thought it was just the company I was working for, so I changed companies. Five times! I even worked in Paris for a year. In the end I didn’t know what I wanted except I didn’t want to remain in this business. It was a time of reflection and frustration.

Not everyone will have this experience. People come to Carmel from all kinds of backgrounds and reasons. Straight away I have to say that not everyone who joins necessarily has a vocation. I joined with seven others; three of them left in the first year. We finished with three. My thoughts on this subject of discernment are my own, based on my own experience and from what I have gained from listening to others and reading the odd article.

Before I joined the Discalced Carmelites I had just come back to the Church after an absence of several years. But now that I was back it was with a vengeance. I focussed on the Church for the first time in a long time, and became happy and motivated. So, one of the signs I would be looking for in someone discerning their vocation is: how important is the Church in your life?  I would expect a candidate to be very familiar with their local church, to know the parish priest, to be involved in some activity in the Church; be that reader, Eucharistic minister, music liturgy, catechist or working with youth. This would be an important sign. A religious is dedicated to working in and for the Church.

I would expect support from the family and friends. When I first had the idea of  vocation,  I must admit, my parents were not aware of how deeply I felt, though my mother wasn’t surprised when I told her I wanted to become a priest. My brothers and sisters were happy as long as I was; but my footballing friends were surprised. One of them said to me in a pub just before I left “John, don’t change”. I’ve never forgotten that. Was it advice?  I can now say that I haven’t changed, though hopefully in some deeper ways I have. So, those closest to you, those who know you best, should not be surprised at the way you are thinking.

If you are joining a religious order like mine, then you will be living in community. So, it is important to be the kind of person that likes being with others, who is fond of people; not necessarily gregarious but has a deep love for his or her fellow man or woman. Most religious tend to be introverts rather than extroverts but that doesn’t mean they don’t like living with others; just they need a bit more space. In my Order, privacy is sacred. My experience is that most religious are discreet and kind and generous. Good qualities to have when you are with others.

You don’t necessarily have to be pious or prayerful. This can come later. That said, prayer should be considered important, and should be part of someone’s life. It is through prayer that God normally calls people. This is a good time to remind you that vocation is a calling: it is God calling us, not the other way round. And if God is calling you then He will make this known to you in His own good time.  The waiting can be important. It has a purifying effect. I waited for at least two years for God to show me what He wanted me to do. In the end, after all the waiting, the frustration and soul searching, I knew what I wanted.

So important at such a time of discernment is to find a spiritual director. It can be your parish priest, or a religious you know. It needs to be someone you know and trust; someone with lots of experience and intelligence. This is key in your process of deciding if God is calling you or not. Remember that most people who think they are being called are not. I am judging this from being in the novitiate with eight others; only four finished. Then in the seminary, we were over thirty at the beginning, but less than half that number went on to be priests. Those who left would find their true vocation: for when one door closes another opens. A director will be like a mirror reflecting back to you your thoughts. He should be a good listener. His or her role is not to tell you what to do, but to guide you. Only you can know if you have a vocation. It is between you and God. Once God makes it known to you then there will be a certain certainty.

You must be patient. Wait upon God. Keep praying. I was advised to pray a certain prayer before going to bed at night: “Show me Lord your way, so that I may walk in your truth”; it’s from the psalms. A holy bishop taught me this. The Lord will not keep you waiting too long.

Nowadays people look up religious Orders and Congregations on the internet. This is a good idea. However, you have to visit to get a fuller picture. How often have I heard religious tell me that when they joined their congregation they felt at home as soon as they walked in the door, or soon after. A gut feeling can be a good one. Remember to trust your feelings. Then back to the spiritual guide to share with him/her your impressions. With the combination of prayer, guidance and research something will happen eventually. It is a question of waiting. Don’t become anxious. Nor, think, that you are not doing God’s work. Today, right now, you are working for God.

I could go on but let me finish with something St Teresa of Avila would want to say to you. She would stress the importance of knowing yourself. This is so important. Be honest with yourself and be open. The more honest you can be the easier it will be for you to hear God calling and know what it is He is asking you to do. Don’t pray telling God what to do but rather, listen to Him, wait upon His word; then, say “fiat voluntas tua” (“Thy will be done”). If God is calling you to Carmel you won’t want anything else.

Just one last word, if you are called to Carmel, then you should be attracted to Carmelite spirituality, to one of our great saints, particularly Teresa of Avila or John of the Cross, or Therese of Lisieux. Or, you may be ignorant of these but love to pray. This too can be a good sign. Carmel has a wonderful tradition of prayer and spirituality. We are blessed with several Saints and even more Blesseds. We need more Teresas and Johns.